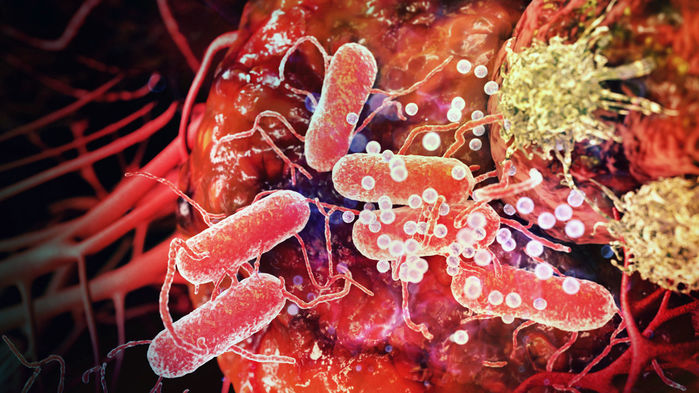 Cancer tends to stick around because it’s practically invisible to the body’s own defenses: The immune system doesn’t recognize the rogue cells because they aren’t foreign invaders. To activate the immune system to attack cancer, scientists have tried all sorts of tricks, including infecting cancerous tissue with bacteria. Now, scientists have modified Salmonella bacteria to trigger a particularly powerful immune response against human cancer cells implanted in mice, shrinking the tumors and—for the first time—preventing them from metastasizing. If the technique can be replicated in humans, it would be a significant step forward for the field of bacterial cancer therapy.

“This team did very solid work, very rigorous,” says Roy Curtiss III, an infectious diseases researcher at the University of Florida in Gainesville, who has pioneered similar bacterial techniques to combat cancer.

Because bacteria often home in on necrotic, oxygen-depleted tissue—present in most solid tumors—scientists can easily “target” cancerous tissue with the microbes. Only one such treatment has so far received Food and Drug Administration approval (a therapy to treat bladder cancer), though others are in the pipeline. But even with the most effective of these techniques, tumors tend to come back and the bacteria themselves can be toxic.

The team, led by biologists Jung-Joon Min and Joon Haeng Rhee, then set out to test the effects of the modified Salmonella on cancer. In one set of experiments, they injected it into 20 mice with human colon cancers. Three days later, the scientists discovered that although the mice had cleared the bacteria from their livers, lungs, and spleens, the tumorous tissue in their colons was crawling with Salmonella. After 120 days, tumors were undetectable in 11 of the 20 mice, which remained healthy throughout the experiment. Control mice, infected with bacteria that did not secrete FlaB, eventually succumbed to their cancers.

Next, the researchers transplanted metastasizing human colon cancer cells into a different set of mice. They treated eight with the FlaB-secreting Salmonella and six with a non-FlaB version. An additional seven mice went untreated. After 27 days, both the untreated mice and those with the non-FlaB version of S. typhimurium had dozens of metastases. But the eight mice that got the FlaB-secreting bacteria had just four secondary tumors in total, with several showing no evidence of metastasis, the researchers report today in Science Translational Medicine.

The FlaB protein probably gets the credit for halting the spread of the cancer, Min and Rhee wrote in an e-mail. FlaB appears to be especially good at activating a secondary molecule, TLR5, that seems to make immune cells more aggressive, “changing them from Dr. Jekyll to Mr. Hyde,” the researchers wrote.

For now, the team will continue to refine the technique with animal models. But sometime within the next few years, Min and Rhee plan to run clinical trials in humans to see whether FlaB-enhanced bacteria could work as a safe, effective anticancer therapy.